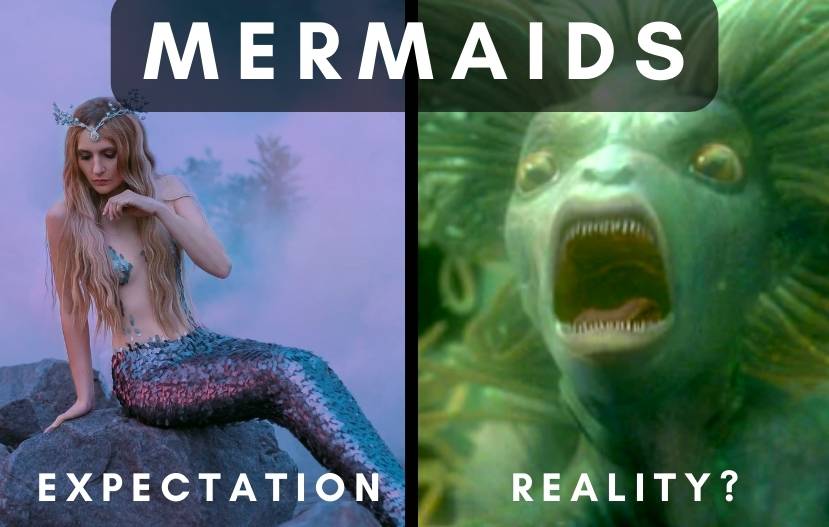 Mermaids from the Harry Potter universe, scary movies or creepy mermaid mummies that you can see in museums have one thing in common – they are very ugly. But are mermaids really that ugly?

Mermaids are not generally ugly. The appearance of a mermaid depends largely on which myth or media she stems from. Mostly, mermaids were portrayed as beautiful but there are some ugly exceptions indeed.

In this article, I will talk about these ugly mermaids and why they are ugly.

Are mermaids ugly or beautiful?

There is some confusion about what mermaids really look like. Sometimes they are portrayed as beautiful young women and sometimes as ugly, scary creatures that lurk in the dark.

This difference in looks is strongly tied to the character a mermaid portrays in mythology, legend and media. This means mermaids can be both ugly and beautiful in myths and movies etc.

If the mermaid portrays the beauty and magic of the ocean and water, their physical being usually reflects this beauty.

Mythological examples include mermaids from mythology and lore like Greek mythology, Haitian mermaids, Nixies and many others.

In media there are beautiful (Ariel) The Little Mermaid, Madison from Splash or the young mermaids in H2O and Mako Mermaids that also represent that beautiful side of the ocean.

Ugly mermaids on the other hand were used in mythology and media to mirror the danger and basically the ugly side of the ocean and the depth of the water.

Furthermore, some people also think that if mermaids were real, they would be much uglier than Ariel or all the other gorgeous mermaids we love. Some of the ugly versions might in fact be more realistic.

Let’s have a look at some mermaids that don’t fit into the beautiful mermaid stereotype.

These mermaids surely are not what you might expect when you think about the beauties of the ocean. They live in the lake right next to the wizarding school Hogwarts in the Harry Potter universe.

When Harry has to participate in the tri-magical tournament in the fourth part of the series, he encounters the mermaids in one of the challenges that are part of this tournament.

Their scary teeth and wild hair reflect how dangerous they can be for Harry and the other wizards.

These mermaids stem from the mockumentary “Mermaids, the body found” from the American channel Animal Planet. This is a fake documentary about mermaids meaning the content is all made up.

But it explains what mermaids might have evolved too, if they were real – they would look kind of ugly. With their greyish skin, huge eyes and sharp teeth, they would look more like a marine predator than a beautiful mermaid.

Mermaids have a long tradition in Japanese mythology. But other than their European counterparts, you can’t really say they were beauties. Instead, they had the body of a fish and the head of a quite monstrous human.

The Feejee mermaids were one of the main reasons why the belief that mermaids might be ugly started to become more popular. In the 19th century, the showman P.T. Barnum received a lot of attention when he proclaimed that he would be exhibiting a real mermaid.

To the disappointment of many people, this mermaid was extremely ugly. It was later found out that this was not the mummy of a mermaid but just of a monkey and a fish that were sewn together and stabilized with paper mache.

Why was the mermaid made so ugly though if it could have been made pretty to attract more visitors? Probably because it is easier to make a bad ugly mermaid and claim it is real than to masterfully craft a fake beautiful mermaid that does her reputation justice.

Another ugly mermaid is no mermaid at all: the manatee. Manatees are also called sirens, which basically means mermaids.

In 1493, when Columbus first sailed to America, he wrote into his logbook that he saw mermaids. But he wasn’t very impressed by them. Instead, he wrote that they were rather ugly and had bearded faces like men.

It is believed that what he saw were not mermaids but actually manatees who lived on the coasts of Haiti where he encountered them.